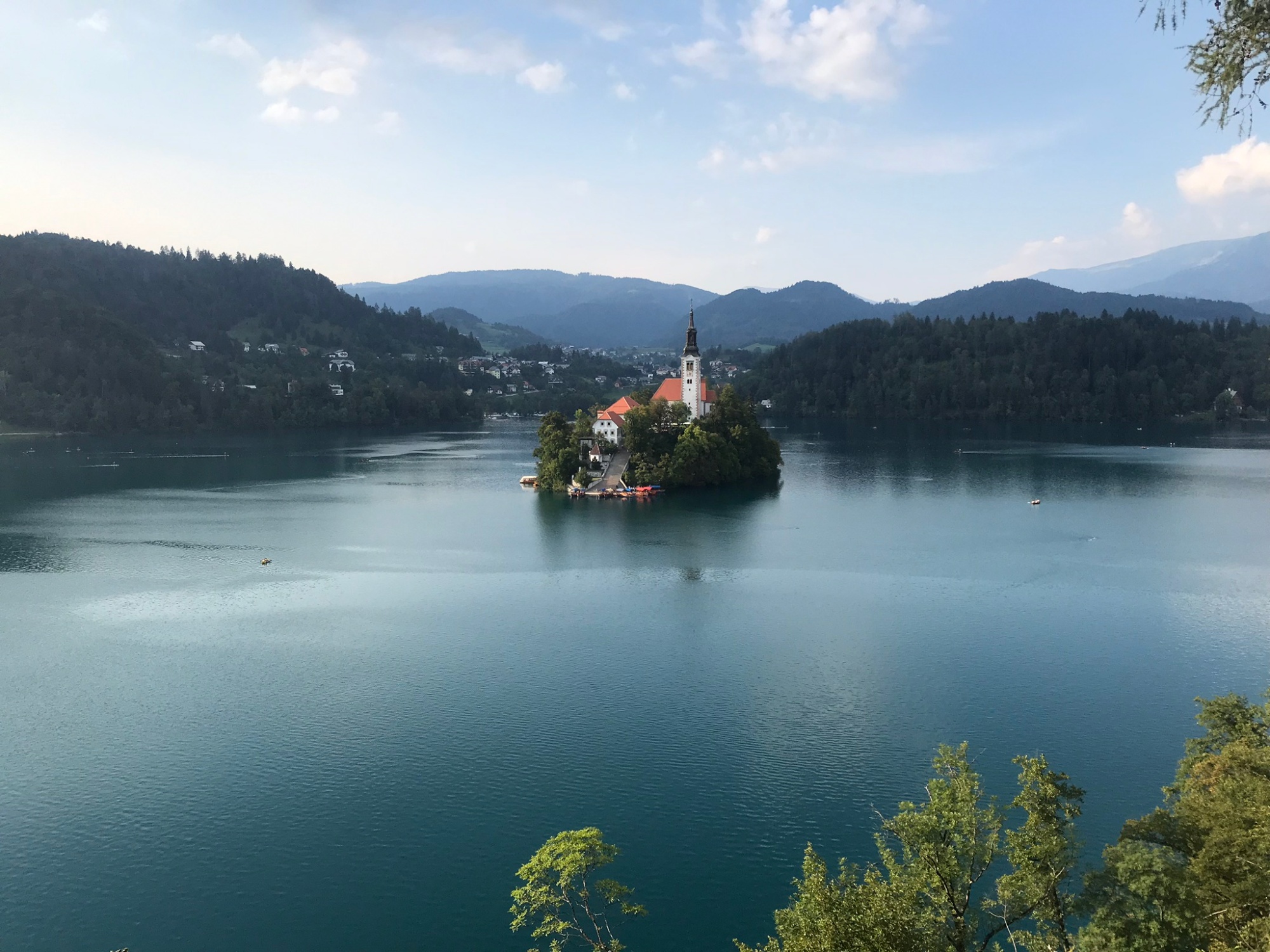 TBH, our second day in Ljubljana was nice, but uneventful, so I wont dwell. We walked along the riverbank again, had some coffees, sunbathed (ish) and then figured we’d best get to the bus stop so we could arrive in Bled at a reasonable time.

Reader, we needn’t have worried about having a desire to go back to Ljubljana because BLED IS FUCKING INCREDIBLE. The end. I mean, I could literally stop this blog right here, because there are no words. NO. GODDAMN. WORDS.

The delights just simply didnt stop coming. Firstly, our BnB was like something from Hansel & Gretel. We had purposely decided to stay somewhere that is set 5 mins back from the lake, rather than on the lake, because the lake is surrounded by a road and quite noisy. We opted for Hotel Garni Berc based on it’s rave reviews, and jesus-effing-christ, we were not disappointed. It is a family-run BnB, With brilliant personal service, free bike rental, a beautiful setting, AND…it was hella cheap. 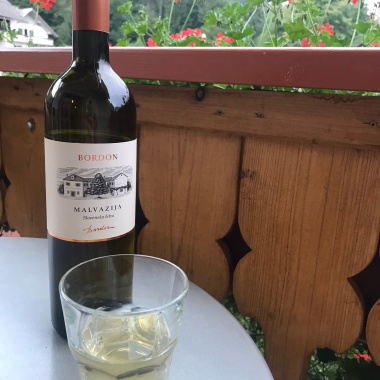 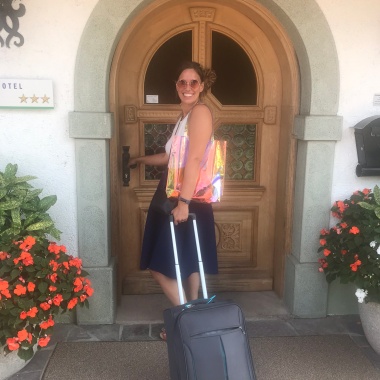 We spent the next half hour just taking in the view from our room (and hanging up all our clothes, of course, because we are orderly…) and then off we ran to the lake. We just were so desperate to see it. And here it is: 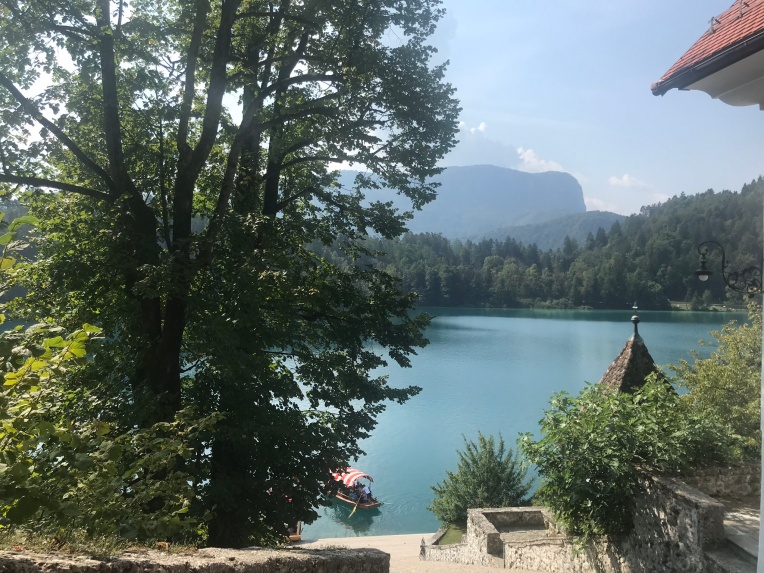 What more is there to say, tbh? We found a nice spot and plunged into the lake for a calming swim. The weather was a beaut, and the lake was filled with swimmers, paddleboarders, and beautiful traditional Slovenia boats which carry tourists around the lake, powered only by one man and a paddle. Fun fact: Slovenia is one of the greenest countries in the world, and motor-vehicles are not allowed on Lake Bled. Not even electric boats. You paddle, or nothing.

We were already living our best lives, but decided to dry off and wander to get a drink. Google Maps told us we were near Cafe Belvedere which apparently had a great view, so we climbed it to it and errrr……

THE MONEY SHOT! FFS. I couldn’t fricking believe it. I felt like I was in a painting.

Slovenia isn’t known for its cuisine, but Bled has two types of famous cake. The Bled Cream Cake, and The Bled Cake. CJ and I shared the cream cake and it was fucking delicious…especially when washed down with some of their lovely vino. We sat there for ages – chatting, laughing, take photos, and just…absorbing the beauty and the silence of the place. 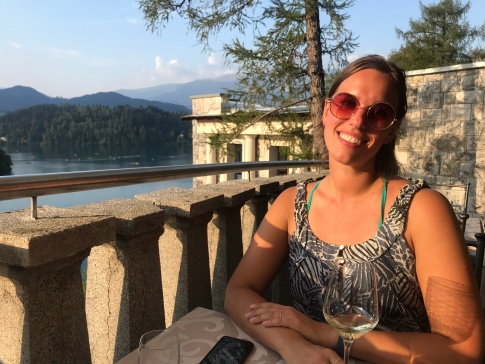 For our first night in Bled, we wanted to go somewhere decent for dinner but really weren’t sure where. We investigated a few options, but eventually decided that we would go next door (literally, 15 steps..) to Penzion Berc, a top-rated fancy-pants restaurant that happened to be owned by the brother of the guy who ran our BnB.

It was a beautiful summer evening, and were seated in the garden…which felt like it was enchanted in some way. A pianist was tinkling the ivories as small groups and couples chattered quietly by candlelight…it was so relaxing and also, fancy as fuck. 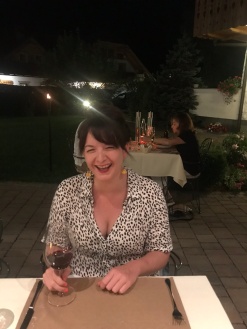 We both ordered steak and red wine, which was as scrumptious as anyone would expect of a high end eatery. Our waiter, however, was a Class A douchebag, and openly berated me for wanting my steak “well done” (I wasn’t sure if it was banter, at first, but no…he was just being a dick) and THEN he judged me for my wine choice, trying to get me to buy the bottle that was twice the price. No no…not today, Satan. I didn’t have time to tolerate his shit tbh, but didn’t want him to ruin our experience so I kept my mouth shut. Other than that bellend, the whole thing was really lovely. And the best bit was that we only had to roll ourselves next door when we had eaten and drank so much we just needed to lie down.

Bled had captured our hearts, and memories of Ljubljana were long gone.