I woke up feeling pretty-effing-drowsy for Day 2, so I smashed back a LOT of coffee at breakfast. Sadly, the coffee in my hotel was fairly rancid, but still, it did the job. The weather forecast was predicting a warmer, sunnier day…so I decided that this would be the day that I hopped on the vaporetto across the lagoon to the island of Burano. But not before another wander through the Venetian streets. 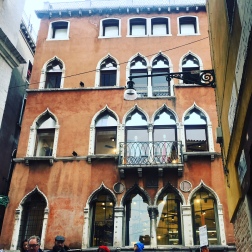 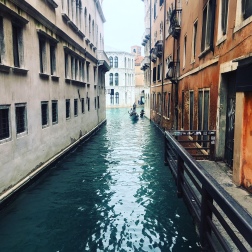 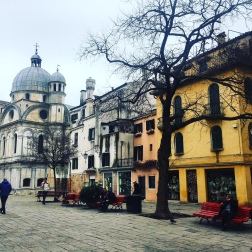 I’d read a lot about the islands surrounding Venice, and all of them are easy to get to, but Burano caught my eye for it’s brightly coloured buildings. Here comes the history bit: Murano was actually the better-known island for many years, due to its glass-making legacy, but when the local women of Burano started making lace, it put Burano on the map. And then the government started controlling the colours of all the buildings to maintain its attractiveness to tourists – apparently they are really strict about it! Anywhoo, I REALLY wanted to see Burano, and it was a 40 minute vaporetto ride from the Fondamente Nova stop up near Cannaregio (about 20 minute walk from my hotel) . I’d read on Trip Advisor (that research coming in handy again!) that if you hop off the vaporetto the stop BEFORE Burano, on the island of Mazzorbo, you get a great view of Burano and can access it via a bridge that connects the two.

So yeah, I did that. And JESUS LORD CHRIST it was crazy-amazing. I mean….I don’t have the words. Just look at the damn photos. 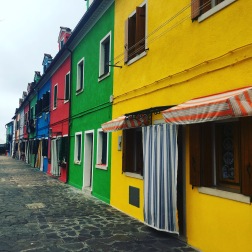 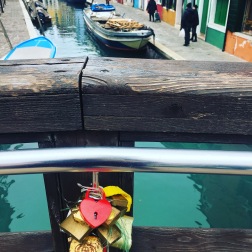 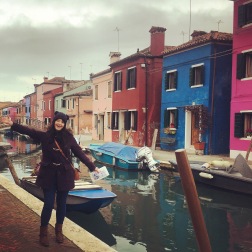 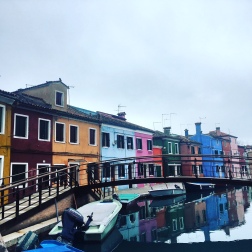 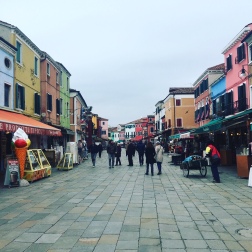 The best bit was that it was so much more chilled than mainland Venice – it’s a little fishing village and very residential so it felt quite authentic, even though there’s obvs still tourist tat everywhere. I did feel a bit of a creepo taking photos of people’s houses but, like, that’s what you get for living in such a picturesque place. Soz. AND I even bumped into the sweet Taiwan dude from the day before – he was rolling solo too, so we took photos of each other like little losers, and then went on our merry way.

Burano even had it’s very own ‘leaning tower’, which is the clock tower attached to the Chiese di San Martino (St Martins church). It’s all slanty due to land subsidence. Yeah…knowledge…I know stuff.

I grabbed myself some gelato while I was there because…ya know….Italy…and then head back to the vaporetto stop to make my way back to Venice.

I was bloody gasping by this point, so I decided to trundle back to the Rialto area where I had my Aperol the day before. I sat down along the Canal again, but at a different restaurant this time, called Ristorante Ferraza Sommariva. I smashed back another Aperol…and then another. Now, I dunno if I was slurring or what by this point, because the lovely waiters kept bringing me extra bread baskets, because, and I quote, “Spritz is STRONG, you should be eating lots madame!”.  (Less of the “madame” please mate) They took a load of photos of me (because I asked, not because they were weirdos) and apparently I looked too sullen in my poses, because they were like “Hold up your glass, SALUT!!!!” So the below photo is the result of that. Salut bitches!

These dudes then tried to sell me another Aperol, obvs, but by then my head was a bit WOOOOO and even I am sensible enough with the booze to know that I needed to go and eat something proper-like. But first, I needed to freshen up and re-hydrate.

When I got back to the hotel, my favourite dude behind the desk had been replaced by some bellend, who, when I asked where I could get food, said “restaurants aren’t open this early (it was 4pm), you’ll have to wait until 7pm”. Alright wanker, no need to be snarky. And also…you are just blatantly wrong.

Sidenote: another random thing I learnt was that Italians say “Buonaserra” as long as it’s after 4pm. Which is weird because at home I’d never say “good evening” at 4pm, but when in Rome/Venice and all that…..

Anyway, I don’t take no for an answer, and I knew that twat was talking out of his arse because I’d seen a few places open in a quiet little square just behind the hotel, so I went to Hostaria Galileo and had a pizza and prosecco. Note: in Venice, they don’t have what we know as prosecco flutes, all prosecco is served in huge wine glasses. Probs because the measures are bigger (and the prices are cheaper, wahoo!) Sitting in this little square, I got to observe all the locals go about their business. There are LOTS of dogs wandering around Venice, because it would seem that their owners don’t feel the need to ever put them on a lead….which suits me fine because it meant I could coax them over with false promises of food but very real promises of hugs. From me.

Once I’d smashed my way through that lot, I was about done for the day. I didn’t go for a dessert, even though I wanted one, because despite my redundancy cash, I really wanted to be frugal, So, I hunted out a local supermarket, stocked up on snacks, took them back to my hotel and chilled out there for the evening.

That’s the beauty of solo travel – if I’d have been with someone else, I would have felt like I SHOULD have gone out for dinner and drinks and banter. And I sure as shit would have spent a lot more dosh! But I just wanted to lay down and watch Netflix. That’s not to say I don’t like holidays with pals – I LOVE THAT – but the purpose of this blog is to big-up-da-solo-travel, and it’s DEFFO one of the biggest pros. Do what ya like, mate.